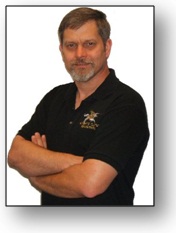 Buddy Knight is the leader of THE TECH-SAFE HOME™ Workshops.

Buddy graduated from the U.S. Naval Academy in 1981 with a degree in Systems Engineering. During his Naval career he served in various active and reserve units including attack and reconnaissance squadrons, major intelligence centers, and on Carrier Group Battle Staff. He was recalled to active duty for OPERATIONS DESERT SHIELD/STORM and was medically retired from the U.S. Naval Reserves in 1995 at the rank of Lieutenant Commander.  His duties took him to Europe, the Middle East, Africa, and Central America.

Buddy received his Masters of Divinity (with Biblical Languages) Degree from Southwestern Baptist Theological Seminary in 2001. Within his degree he completed a concentration in the field of Marriage and Family Counseling. As an ordained Minister of the Gospel, Buddy has served both as pastor and as a minister-at-large.

Knights' Quest Ministries was founded in 2001 as a result of the Lord’s leading during Buddy's 2000-2001 Field Theology Seminary Classes. During this period, Buddy met many parents who had discovered that their children were into unhealthy uses of the Internet. He has also counseled and worked with adults whose lives have been adversely affected by issues involving online sexuality.  In 2005, after 4 years of confirming growth and opportunity, Knights' Quest incorporated as a Texas Non-Profit Corporation.

In addition to developing 21st Century discipleship materials, Buddy has also written numerous articles for regional and national magazines such as Lifeway Publishing's PARENTING magazine.  He had testified on Internet safety topics before the Texas Legislature and has appeared on various TV/radio programs both  in and outside of Texas!

Buddy lives in Fort Worth, TX with Jane, his wife of 33 years.  Jane is a high school math teacher in the Fort Worth ISD and an adjunct Instructor at Tarrant County College. Buddy & Jane have four children ages 20-30, including one serving in the U.S. Marine Corps.  He is active as a deacon in his local Church and as a leader in his Church's Celebrate Recovery program.  Buddy is also a cancer survivor (Hodgkin's Disease, 2003).  He also enjoys movies, reading, American karate (Gold belt), Scouting, and computer strategy/flight simulation games.